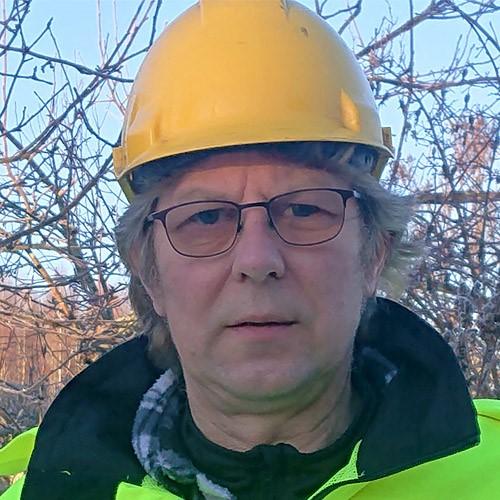 In a personal interview Jouni Jetsonen

Learning new has always been a motivation for the multitalent

I graduated from vocational college as a telephone installer in 1981, but I haven’t worked a single day in that field, except for three hours running a telephone cable on the bottom of a lake. After graduating, as a young man I worked in various jobs in very different sectors, for example at a service station, as a fish processor – preparing a 400-kilo batch of lye fish for Christmas, with baler for a few summers, until my uncle tempted me to work for Pohjavahvistus Oy. I already knew the company because my father had worked there from the 60s until the early 70s. I started working as a driller in 1986 at Pohjavahvistus Oy, which later became part of Terramare through an acquisition.

I have mostly worked as a driller and blaster on all of our drilling barges built for underwater drilling and blasting work. The work of a driller and blaster varies a lot. Blasting work also requires a blaster’s licence, which nowadays is valid for five years at a time. In addition to the Nordic countries, I have worked at drilling and blasting sites in Germany, Italy, France, England and Russia. The northernmost location was on the Arctic Ocean, in Hammerfest, Norway and the southernmost on the Gulf of Guinea in Equatorial Guinea.

A driller’s main job is to monitor several drilling measurement devices on the drilling unit at the same time and to compare this information with the performance of the drill rod during drilling. In addition, a computer application tailored for the purpose is used to measure the location and progress of drilling.

The blaster is the driller’s most important co-worker. After the hole has been drilled, the blaster charges it with either dynamite or emulsion explosive. The blaster’s work is very physical, at least when the holes are charged with stick dynamite (explosive), and thus being in good physical condition is an advantage, because you can walk up to ten kilometres on a drilling barge. Once all the holes have been charged, the barge is moved away from the site and the blaster detonates the explosion.

Vibration restrictions must be taken into account when drilling and blasting in ports and cities. Vibrations are regularly measured with vibration meters and the customer always receives reports on these. Drilling rigs have become technically more reliable and safer. Similarly, attention has been paid to the noise caused by drilling equipment and it has also become quieter since I started my career as a driller.
As there is not always a need to drill and blast the hard seabed in the harbour basins or fairways of the ports we work at, at other times I had the opportunity to work on our other vessels, for example as a metalworker on dredgers and as a deckhand on dredgers, barges, and tugs. Terramare has its own repair shop in the Loviisa Plant Department, where I have sometimes spent long periods repairing and servicing our marine engineering vessels. During my long career, I have seen the company’s operations from many different perspectives, and personally this has been a great motivation for. I will always be happy to try some new task if it is offered to me. Diversity and variety have definitely added spice to my career.

Diversity and variety have definitely added spice to my career

Next, I’ll be going to one of our quay sites, where concrete quay elements are made on site using the slipform casting method. My job description is to be a jacker, which means that I’ll assist in raising the jacking boards 48 steps upwards as the slipform casting proceeds. I have previously been on quay sites as a general workman doing reinforcement work, assisting carpenters, and quay construction tasks.

The best thing about my work, in addition to the diversity and variety, is the possibility of period work. The length of periodic work varies depending on the site. I have a good work schedule in which I have two weeks of work and then two weeks off.